In her performance on May 30, 2013 in front of the French pavilion at the 55th Biennale di Venezia, Dayanita Singh signed and stamped copies of her book File Room (Steidl, 2013). Through this act of personalizing her books, Singh made the gesture of a gift; purchasers of her book not only received an individualized catalogue from the artist but also a bag and a scarf.

See here for pictures of the performance. END_OF_DOCUMENT_TOKEN_TO_BE_REPLACED 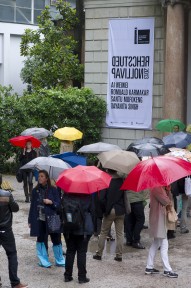 END_OF_DOCUMENT_TOKEN_TO_BE_REPLACED

The German pavilion at the 55th Biennale di Venezia pursues a transnational approach. Due to the French-German cooperation at this yearʼs Biennale, the contribution curated by Susanne Gaensheimer with works by END_OF_DOCUMENT_TOKEN_TO_BE_REPLACED

Dayanita Singh, Mona and Myself  and Sea of Files, installation view the German contribution in the French pavilion Venice 2013, courtesy of the artist and Frith Street Gallery, London. © Roman Mensing in cooperation with Thorsten Arendt, artdoc.de

"As a young woman, Dayanita Singh started to portray a famous Indian musician and tabla player as he traveled around the world. He subsequently became her spiritual mentor, END_OF_DOCUMENT_TOKEN_TO_BE_REPLACED 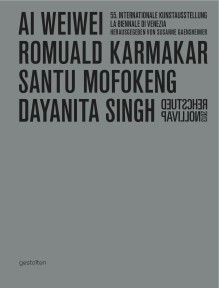 We are pleased to announce the upcoming release of the official publication of the German Pavilion at the Biennale di Venezia 2013!

Edited by curator Susanne Gaensheimer, the 240-page, cloth-bound catalogue will be available as of May 28, 2013 and is published by Gestalten, Berlin.

Eleven international authors—curators, artists, collectors, and critics as well as scholars from the fields of art history, politics, migration research, philosophy, and cultural studies—were invited to take part in this interdisciplinary discussion on cultural and sociopolitical aspects of the German contribution to this year’s Biennale di Venezia. END_OF_DOCUMENT_TOKEN_TO_BE_REPLACED

Do we need the classifications of national or cultural contexts in order to understand photography, and to what extent are such categorizations of cultural identity relevant in contemporary cosmopolitan society?

Aveek Sen raises these questions in his text Roots in Air and reveals deep-seated western mechanisms of reception and the feedback effect that they meanwhile have on the art of non-western artists. For Dayanita Singh it is essential that her work be read independently of rigid contextualizations or stereotypes, and Sen familiarizes us with the conceptual model of this approach.

Aveek Sen is a writer and an editor for The Telegraph, Calcutta. Roots in Air is one of nine essays by Sen that are included in Singh’s book House of Love. House of Love was published in 2010 by Radius Books co-published with the Peabody Museum Press.

Written by Rachel Spence, the article “Infinite possibilities” on Dayanita Singh appeared in the Financial Times on April 26, 2013. Spence met with Singh in her studio in Delhi and spoke with the artist on politics, love, friendship, and her relationship to photography and books. The article offers an overview of Singh’s artistic work from the past 20 years and outlines Singh’s conceptual approach, which is based on a notion of art that defies categorization and stereotypes.

Read the complete article on FinancialTimes.com

Dayanita Singh’s new publication File Room was published in March 2013 by Steidl. The book presents black and white photographs from the series by the same name: images of archives and back room offices. Crammed with papers and files, these spaces refer to human systems of conservation and memory.